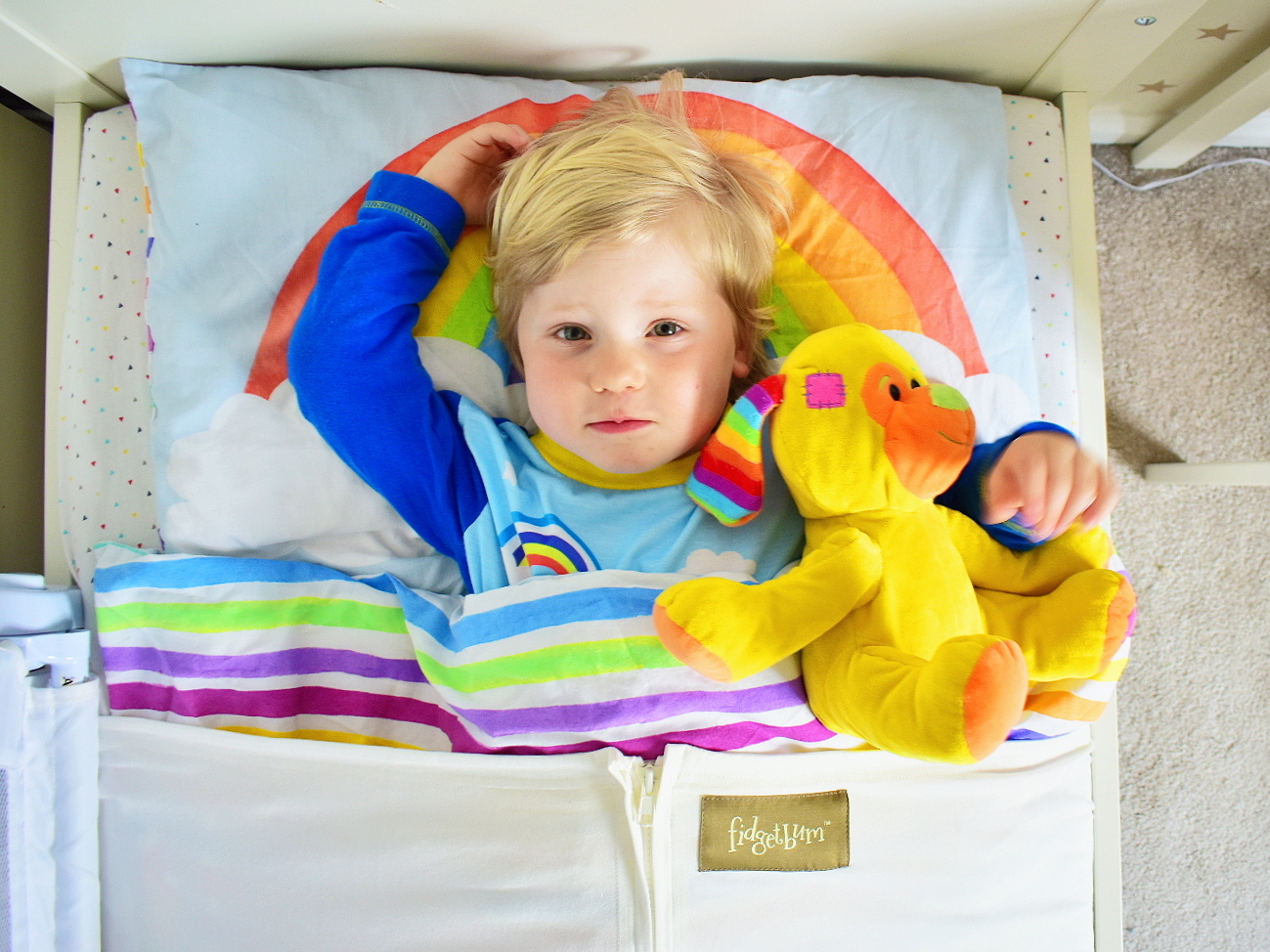 If you’ve been reading my blog or following me on Instagram for a while, you will probably be aware that sleep (or lack thereof!) has always been one of our biggest struggles with the twiglets. Generally things are much much better than they used to be (I mean when they were babies I could regularly be found Googling whether or not you could actually die from sleep deprivation 🙈) These days, more often than not (excuse me while I just touch all the wood in the universe!) C will sleep through the night. Don’t get me wrong, it can be an utter ballache to get her to go to sleep in the first place, but once she’s down she generally stays there! 🤣 H on the other hand, can still wake a few times a night, and, as has always been the case, I’m never really quite sure of the reason why 🤔

Anyway I was whinging about this one day on Insta, (as I tend to do 😂) and a friend recommended Fidgetbum, saying it had been a complete gamechanger for her twins’ sleep, as it stopped them kicking the covers off. I wasn’t really sure whether H’s night waking was due to this or not, but he certainly moved around a LOT in bed and would often scream out during the night that he wanted to be tucked in. He would rarely have his covers on when I’d go in to check on him. So when I saw that Fidgetbum were looking for people to test their product, I applied figuring it was worth a shot, and was super happy to be chosen 😁

Mel from Fidgetbum was really friendly and helpful, and I was especially happy to support them when I realised the business is local to me in Surrey 😊 Fidgetbum is such a clever idea. It’s basically a very stretchy sheet which goes right the way under the mattress and zips up over the duvet cover, therefore keeping it in place. 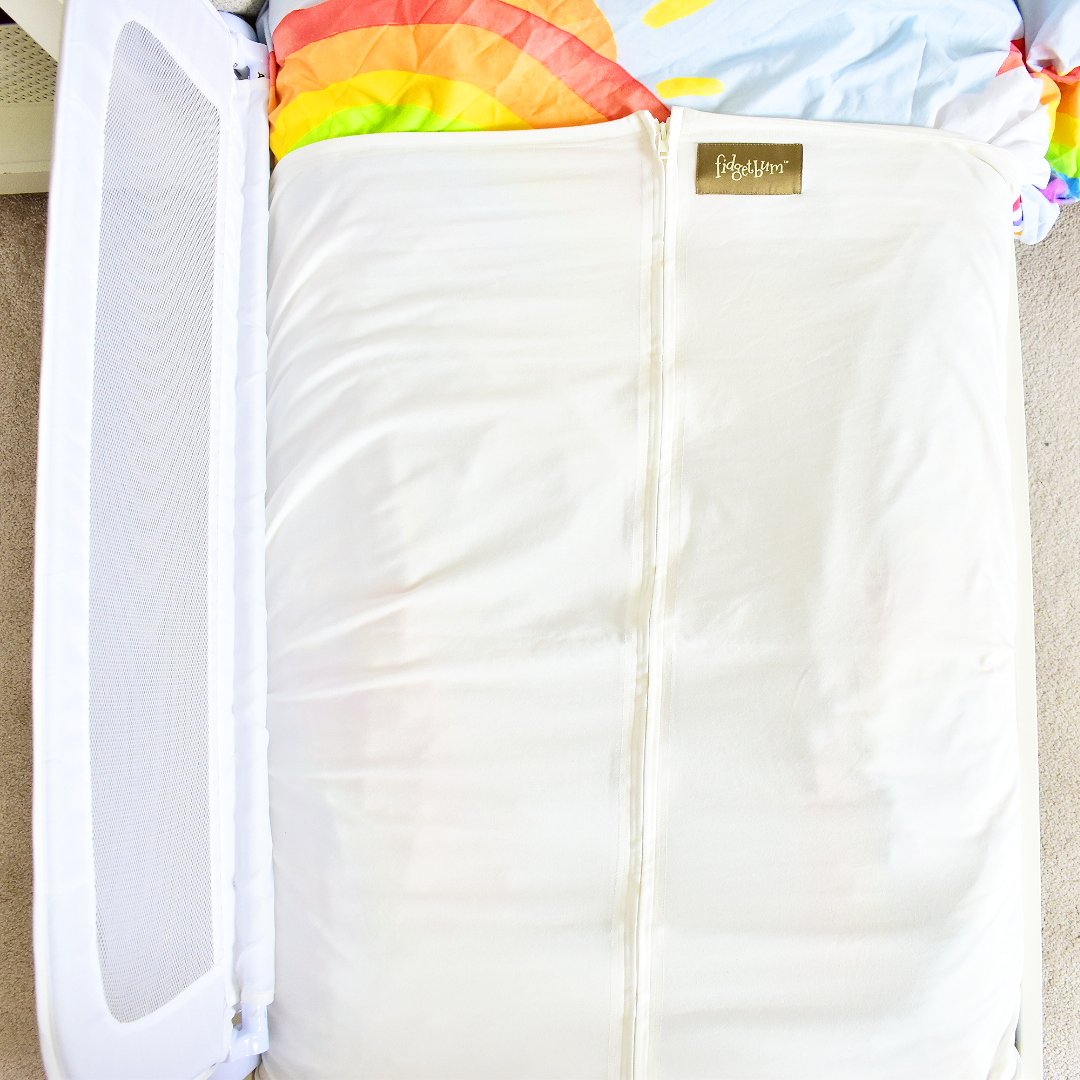 H was super excited when we put his special sheet on his bed (in fact, C was a bit miffed that she didn’t have one too 😂) However, he is sooo restless and fidgety as he falls asleep and he did get a bit annoyed with being that bit more restricted than usual. The Fidgetbum is so stretchy that children can easily move around under it; I think H is just on another level of wriggliness though 🤣 I was actually a little nervous that maybe it wasn’t going to be successful for us 🙈 But… he then slept all night without waking up! 😱 And the next night he seemed more used to it and fell asleep quite happily – if anything I think feeling more secure and cosy helped him to fall asleep quicker. A few times he has managed to escape in his sleep and I’ve found him lying on top of his Fidgetbum sheet, but I can easily slip him back under without him waking 👍🏻 (and it’s also reassuring as it shows it’s not at all too tight).

The main thing is there has been a major improvement in his sleep – all hail the sleep gods, aka Fidgetbum makers! 🤣 Rather than throwing himself around and doing 180s in his bed all night, he’s been getting calm, restful sleep and… *whisper* actually finally sleeping through!!!!! (I have to whisper or it might all change! 😂)

So, if your little one is about to make the transition from a cot to a bed, or is just waking frequently during the night and needs a bit of added security, I would thoroughly recommend giving Fidgetbum a go. I wish I’d discovered it two years ago 😂😊

Thanks for reading – I hope this review was useful!

NOTE – We were kindly gifted a Fidgetbum sheet to review – all opinions, as ever, are honest and my own 😊