Getting Ready For School 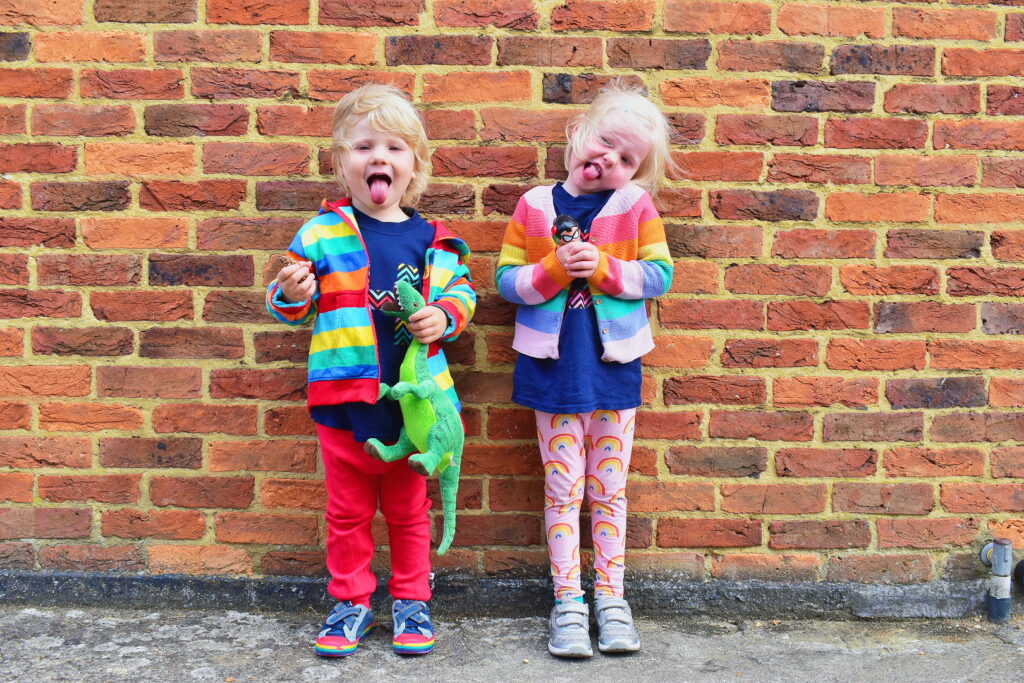 Hi there! So at the moment we are balls deep in getting ready for school. The twiglets will be starting Reception in September – just a short few weeks! As they’re my first (and last!) to start school, this is all new to me and I’m learning as I go. But I just thought I’d share some of the things I’m doing and buying in case they might be of use to anyone. I’m sure none of it will be revolutionary and will most likely be stuff you’ve read before and/or are doing anyway. But I’ve been enjoying reading people’s posts about this topic so thought I’d just share our little journey too.

One of the most-asked questions by parents of children starting school seems to be: How many sets of uniform should I buy? From what I’ve found so far, people’s answers seem to vary. Some people say five sets of everything. A friend who has twin boys told me she has three sets of everything for each of them but that she washes every day. Now I don’t know about anyone else, but I don’t think I can be arsed with washing every day! It does depend on your standards of course – whether you want their clothes to be spotless at the start of every day or whether you’ll allow them to re-wear stuff.

I’d be inclined to let mine re-wear clothes once or twice, but obviously it also depends on the child. H always came home from nursery absolutely filthy head to toe most days, whereas C is much tidier and tends to eat her lunch rather than throw it down herself 😉 I have pretty much got three sets to begin with, with a few general spare bits for emergencies e.g. extra polo shirts, and we will see how we go.

The other thing with buying uniform is whether you buy it from the school’s official stockist or cheaper alternatives from supermarkets or other shops. Obviously this is very much dependent on your budget, as well as the individual school’s rules. I have got jumpers/cardigans, some polo shirts and PE T-shirts from the official shop, as they are meant to have the school’s logo on. Everything else I have got from elsewhere (Sainsbury’s and Asda as they were recommended to me). I got some spare polo shirts from Aldi as they were SO cheap (I would have got more bits from there but didn’t get there in time and it was all gone!)

In terms of shoes, most people I’ve spoken to have said it’s better to spend a bit more and get good quality ones from Clarks or somewhere if you can. That way they should last longer and be really comfortable. Of course the problem with this is if you spend a lot then their feet grow after a few weeks, you’re buggered! The twiglets’ feet generally seem to grow fairly slowly, although C’s have just had a huge spurt and she’s gone up two sizes! Hopefully that will be it for a while now! We’ve just got some from Clarks – not the cheapest but the 10% TAMBA discount helps slightly and they look really good quality (fingers crossed!)

To be quite honest, this seemed like a bloody minefield to me! Iron-on labels, stick-on labels, sew-in labels… Argh! How do you know what’s best?! I’m such a last-minute Larry that I would probably just be scrawling their names on labels with a Sharpie given half a chance. To be fair, this is exactly what I’ve done all the way through nursery/preschool!

But thankfully we were very kindly offered a set of stampers from Stamptastic as a gift. I’d seen a few mums recommending these on Instagram so I jumped at the opportunity. You can customise your own stamper with the child’s name and a logo of your choice – there’s a huge range to choose from. It made labelling their uniform SO EASY and I’ve heard great reviews from other mums saying they withstand washing really well. 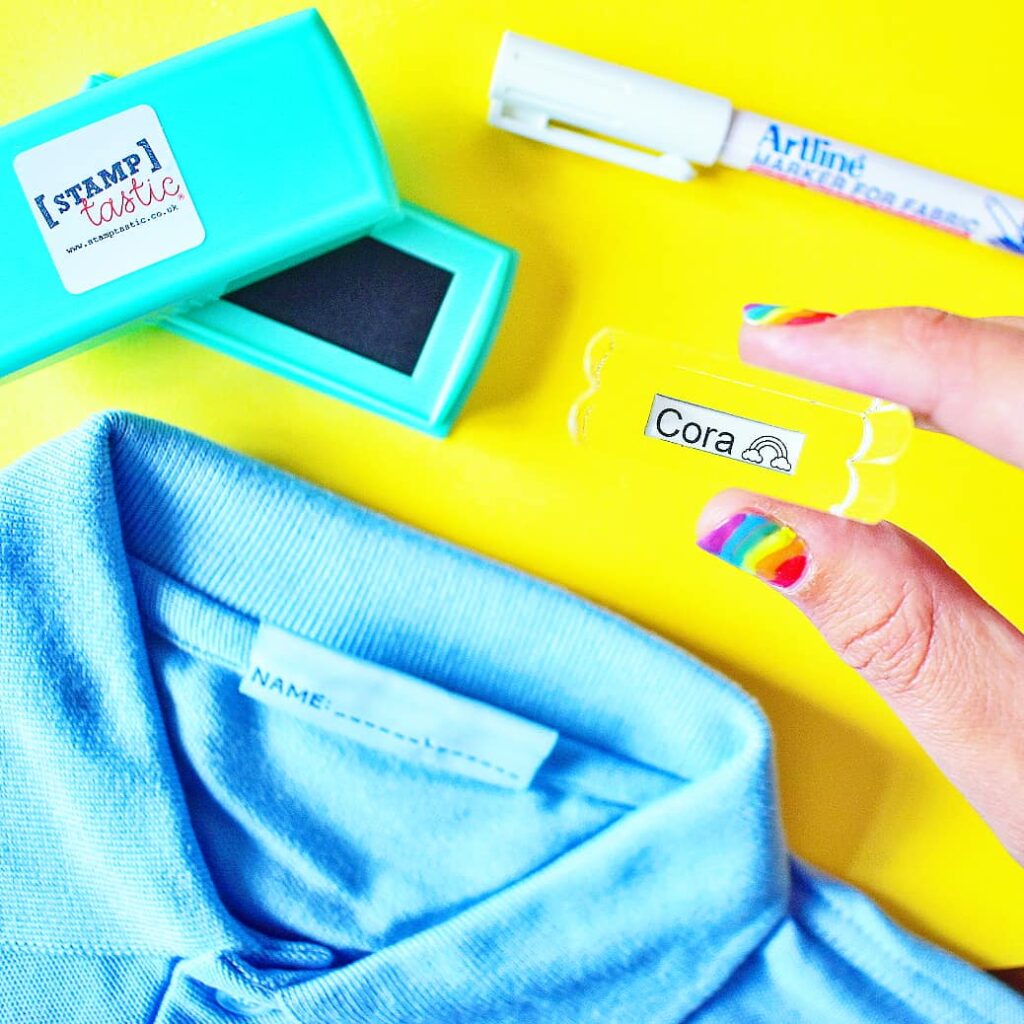 These are some of the things we have been working on over the summer:

The twigs are going to be young ones in their year – they’ve only just turned four. H was only potty-trained after he turned 3 and it took a while to get there fully. So it’s really not been all that long (and we’ve been having some regression issues too). But even still, I am attempting to teach the twigs how to wipe their own butts. Five Minute Mum (who has brilliant ideas on basically everything) has a great method for this called the 3×3 method. You can find it described in this post, which basically covers all you need to know on getting little ones ready for school 😊

I’ve also been teaching the twigs how to ask to go to the toilet. Obviously they don’t have to ask me and at nursery they just used to take themselves off. But I’ve explained to them that at school they will need to actually say to a grown-up ‘May I go to the toilet please?’ Sounds obvious but it’s one of those little things that will just make it a bit easier if they understand in advance.

I’m quite lucky as the twiglets have always been pretty keen to dress themselves independently. They are quite good at it now too. We will probably have a few more practice runs of getting school uniform on, as obviously that’s a little different. I think tucking in polo shirts may be a bit of a tricky one, for example.

We also need to practise getting shoes on the right feet with H. On the Five Minute Mum post I linked earlier, there’s a good idea of cutting a sticker up and putting half in each shoe so the child can match it up.

Children do not need to be able to count to 100 and write full sentences before they start school. But there are some basic things that it’s useful for them to understand. Recognising their own name is an important one, even if they can’t write it yet.

I bought the ‘Starting School’ toolkit from My Busy Bots (who we have worked with before and are utterly fabulous). It’s a set of cards with useful things for kids to understand and practise, like rhyming words, opposites, basic sounds and storytelling skills. We’ve really enjoyed sitting on the sofa having a cuddle and chatting our way through a few pages of this at a time.

We’ve also been using these ‘Starting School’ sticker books from Usborne. They’re a fab way of introducing children to the layout of the classroom and some of the things they’ll need to do – like hanging their things on their peg, answering their name for the register etc. 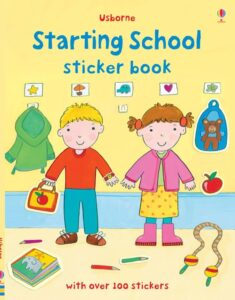 As well as the sticker books, we’ve also been using these wipeclean books. Children can practise writing lots of words that are useful for school. They’re also Usborne but we were kindly gifted these from Two Little Monkeys Books (a lovely independent Usborne seller 😊) She has given me a discount code for 20% off – ‘Hannah20’ – just DM her on Instagram if you’d like to order 😁 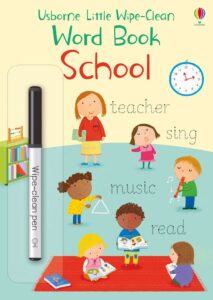 We haven’t actually started this yet, but as we get closer to the beginning of the year, I’m going to be introducing a bit of a morning routine. One of my favourite things about the summer holidays has been the slow, relaxed mornings. Not having to rush anywhere, being able to go at our own pace, not being stressed about running late…

However, after six weeks of this, I feel that getting everyone out of the house on time for school is going to come as a bit of a shock. So to help, I’m going to try to introduce a few little changes soon. Like having the twiglets’ clothes laid out ready for the next morning. And getting them to get dressed first thing before they come downstairs and have breakfast. We may even practise the walk to school a few times too.

Obviously we’ve got to have the obligatory first-day-of-school photo (I’m feeling emotional about it already!) I bought these really cute little mats from Little Boo Learning – they’re reusable so you can make great comparison photos each year. The wipe-clean ones I think are now sold out but you can still order the print as a digital download and create your own version 😁 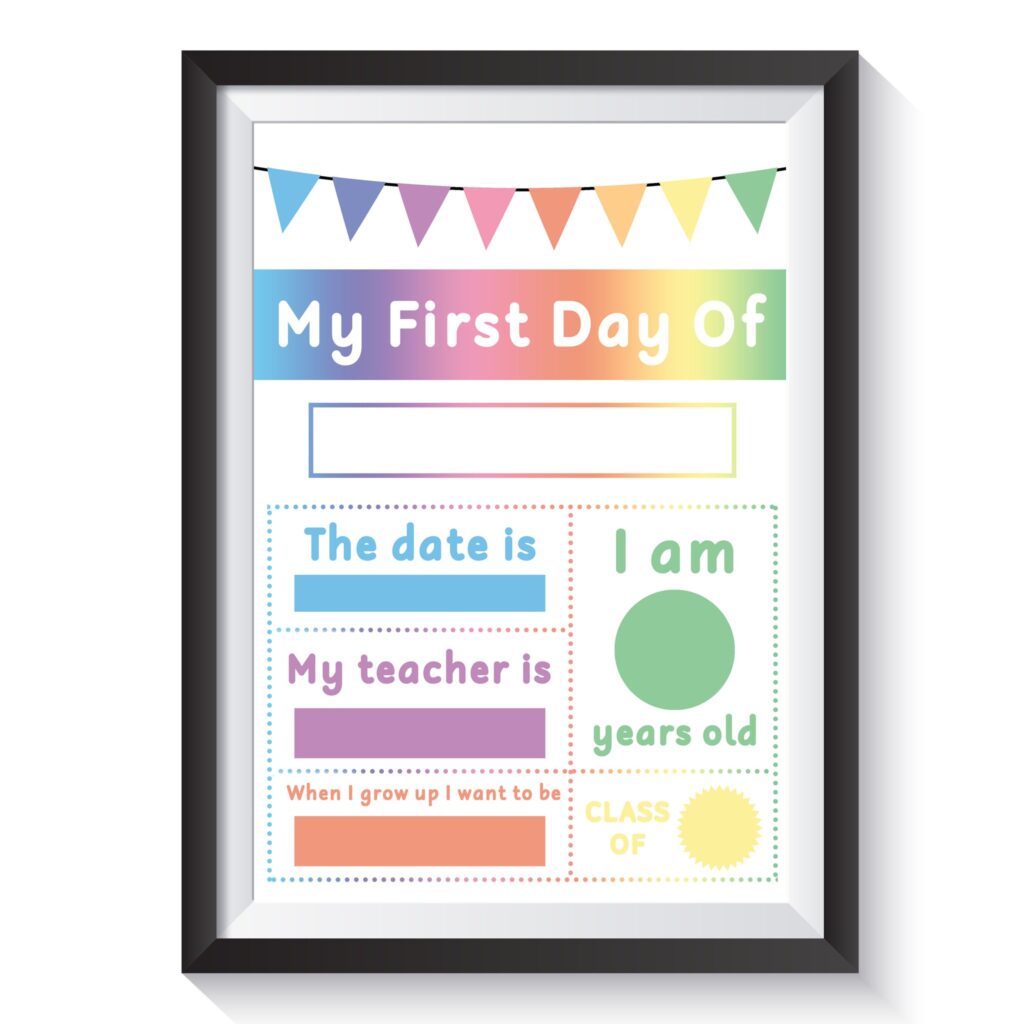 I really hope this has been useful if you too are in the process of getting your little ones ready for school. Probably the main thing is to be really positive and excited about it in front of them, even if like me you’re actually an emotional wreck!

Follow
We use cookies to ensure that we give you the best experience on our website. If you continue to use this site we will assume that you are happy with it.Ok