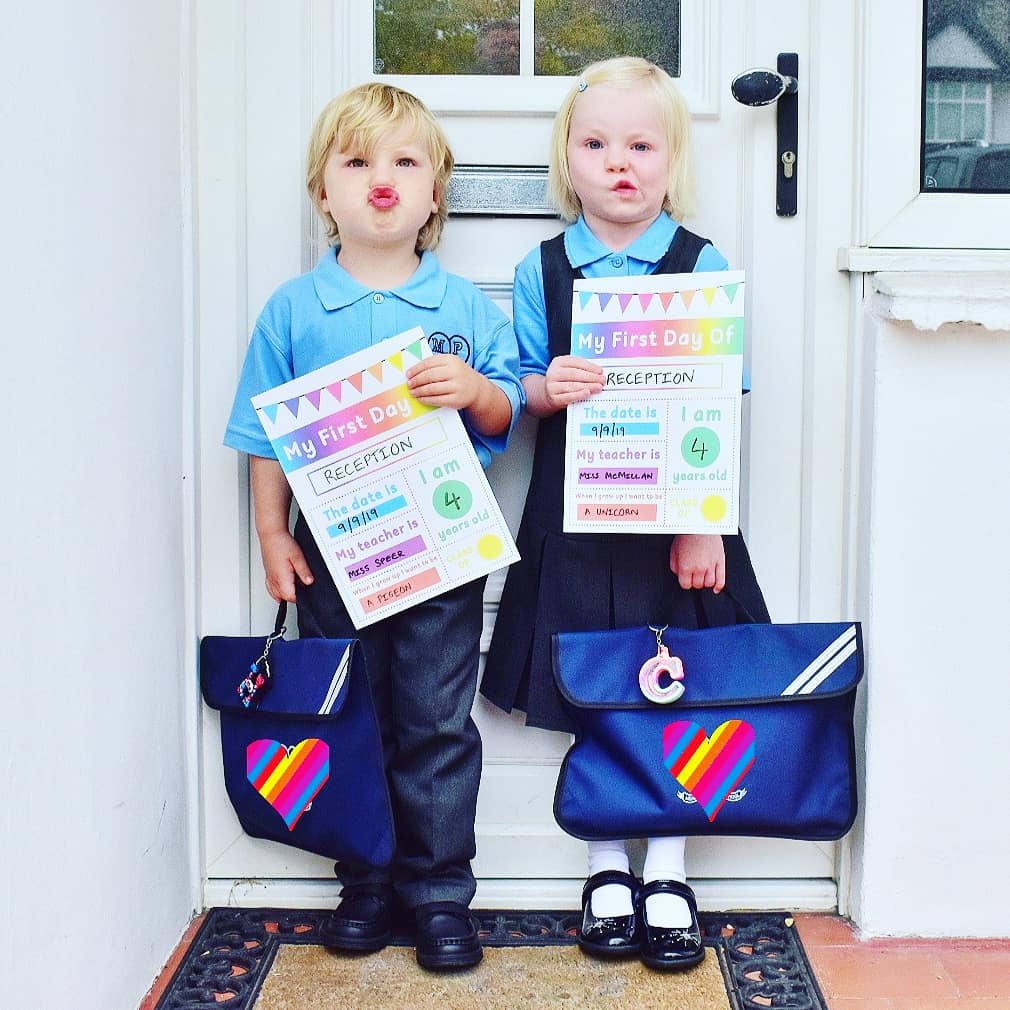 Helloooo! So the twiglets’ first week of school is already done and dusted! Mornings only, but they’re moving to full days this week. It’s been a bit of a rollercoaster so far! (If you follow me on Instagram, you may already know that!) So I thought I’d just write a little update on how it’s going and how they’re settling in.

Their first day was last Monday and it was all quite exciting. The home visit the previous Friday had gone really well and they were both looking forward to seeing their teachers again. They were up and ready early in their uniform looking all cute and smart, and we did the obligatory first day of school photos by the front door.

We walked to school – Daddy came too as he was going into work a bit late so he could be there too. Drop-off went really smoothly and they both went in to their classrooms happily. I thought I would feel really emotional on that first day but I actually felt ok. I’d had an absolute breakdown the night before so I think I’d got it all out of my system! I went into town to get them a treat for after school and they were only there for just under two hours so the time flew by! They had a great time and had lots to tell me when I collected them.

For the rest of the week, they did full mornings (8.50-12). Everything was going well for the first three days. They were pretty tired even from doing just three hours and were asleep by 7pm every evening (nice easy bedtimes for a bloody change haha!)

Then on Thursday, something changed. C woke up in a funny mood, saying she wasn’t going to school. She sat on our bed refusing to move or get dressed. I think the realisation had hit that it really is every day they go. Previously the twigs did 2 1/2 days at nursery so they had never experienced going every day. We tried everything – coaxing her gently, asking her why she didn’t want to go (‘because I just don’t!’), being a bit firmer, reminding her of all the fun she’d have, etc.

Nothing was really working until I suggested doing love buttons. You’ve probably seen this idea floating around on Facebook and various places (also called ‘hug buttons’ – you can read more here). C got quite tearful when I asked her if she was missing H, so I did the buttons on the two of them, rather than me. I drew little hearts on their hands and told them if they were feeling a bit wobbly or lonely in their classrooms, they could press them and send some love to each other. C was excited at this idea and they walked to school holding hands all the way to charge up their buttons with love.

When we arrived, C was absolutely fine. She found a couple of friends and was chatting with them. Then suddenly, when it was time to go in, she went crazy. She was crying and clinging onto my legs saying ‘I don’t want to go Mummy – don’t make me go!’ I quickly dropped H in, as I didn’t want him getting freaked. I took C up to the TA on the door who tried to talk to her but she was having none of it. By this point she was absolutely screaming the place down. I knew I needed to get away as quickly as possible really, as there wasn’t anything I could do to make it better (other than take her home which I wasn’t going to do!) The TA realised this too so helped take her off me so I could make a run for it.

It is such a horrible, horrible feeling, leaving your child heartbroken and screaming for you. All you want to do is run back, scoop them up in your arms and leg it. But you know the right thing to do is to leave, even though it goes against every maternal instinct in your body. You also know that they will be fine. When I chatted to the TA at pick-up (after C had come bouncing out happy as anything), she told me she’d been absolutely fine two seconds after I’d gone. It’s crazy how fast these kids can switch!

Friday was better. I deliberately left a little later, so we weren’t hanging around waiting to go in for as long. She did get all wobbly and a bit tearful but she held it together. I was so proud of how brave she was actually. Then of course we’ve had the weekend, which was nice and chilled – not too busy. I was worried about how this morning would go. C was obviously feeling anxious – she kept repeating ‘this is my last day of school Mummy.’ Hmm not quite love, just another 16 or so years! 😉 Anyway, similar to Friday, she got all teary but again kept it together and the TA whisked her in quickly. She didn’t come run back out screaming or anything so I’m assuming she was fine.

I think when C’s actually there, she is enjoying it. She loves her teacher and the other grown-ups. I’m not sure how much she’s playing with other children yet. Same for H too. I’m super impressed with how he’s been taking it all in his stride. He’s been saying ‘Good morning!’ to his TA in the morning with a big cheesy grin on his face and bounding in quite happily.

It’s really strange actually, because I was SO worried about H and how he would cope. I said to the teachers at the home visit I had no real concerns about C but I had a big list of them for H. And now it seems he’s the one who’s unfazed by all the changes and just getting on with it, and it’s C, the more dominant twin, who’s struggling with the separation. I guess she depended on H more than we realised – it must be like a security blanket that she’s always had, has suddenly been whipped away.

I have found myself doubting and wondering if maybe we’ve made the wrong decision separating them. But I have to remember that my instincts for a long long time had told me they would be much better off being split (you can read about our reasons in this post). I have to hope that in the long run, both of them will be fine and it will be the best thing for them.

Anyway it’s really early days. Starting school is a big change for any child, let alone with the added element of being separated from your twin. The twiglets are young ones in the year too, as they only turned four in July. Hopefully with a bit more time, as they get used to it all, everything will settle down.

How was the first week of school for your little ones? Hope it’s gone well for everybody. 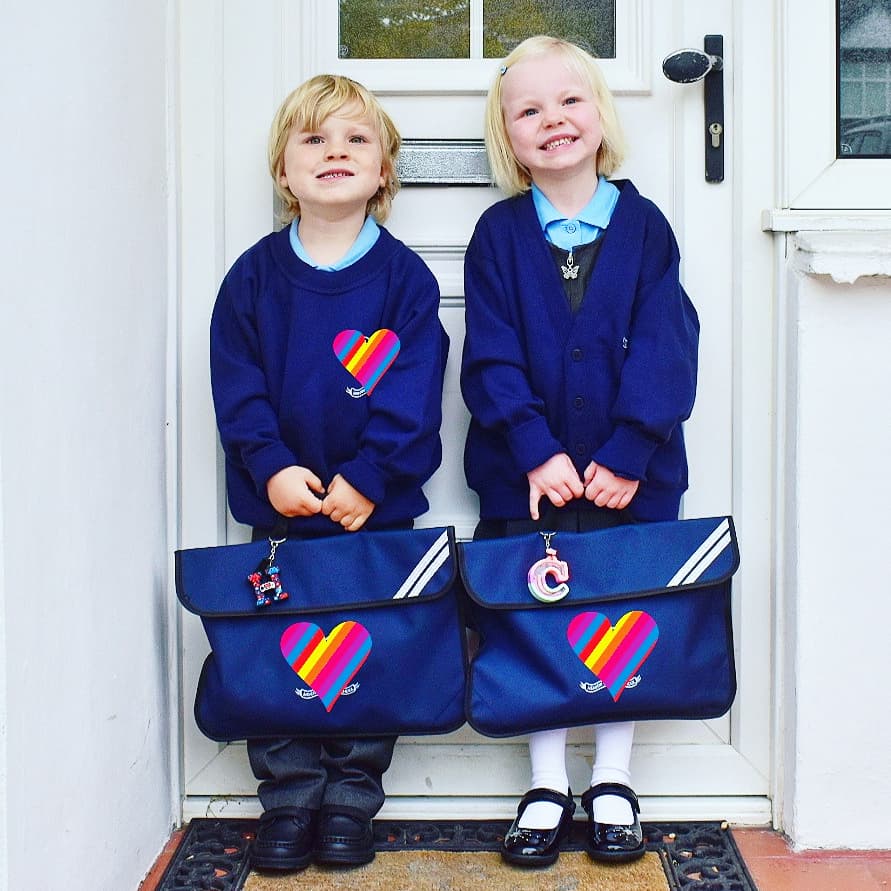 A Little Ramble About Big Changes