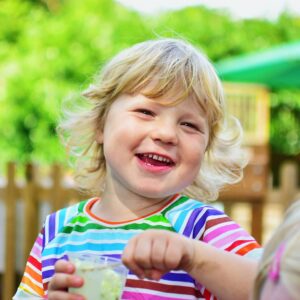 At the moment, H has fairly long hair. I mean, for a boy. Argh already I hate the implication of saying that, but the fact is the majority of boys do have short hair. And his is definitely on the long side. But it reeeally suits him. And yet I am feeling under pressure to have it cut…

The last time H had his hair cut (quite a while ago!) the hairdresser took off more than I had intended. I think I probably wasn’t very clear when I explained what I wanted. He has wavy curls which I LOVE. So I’ve been too paranoid to get it cut again since, because I didn’t want him to lose them again. Maybe this time he’d lose them forever? I know so many mums who say they regret cutting their boy’s hair because they lost their beautiful curls.

But a few things recently have made me feel that maybe it should be cut. And it’s not because H wants it done – he doesn’t really have a strong opinion either way.

It’s mainly because, on quite a few occasions over the summer holidays, strangers have thought that H is a girl. Mainly children but some adults too…

Now personally I couldn’t care less when this happens. It’s happened both ways round since the twiglets were babies. Often people would think C was a boy when she was bald as a coot for three years and dressed in gender-neutral clothes. I’ve always tried to avoid gender-stereotypical clothing to an extent. I wouldn’t say fully because there are things I wouldn’t dress each of them in. For example, I wouldn’t generally put H in frilly florals (unless he really wanted to wear them!) But to be fair you’ll rarely see C in stuff like that either! They tend to both wear more unisex, colourful clothes. This is where my love for shopping small came from. There’s just so much more interesting choice of non-gender-stereotyped clothing from independent, handmade businesses. Sadly I can’t afford this so much these days, but brands like Little Bird by Jools are also fab.

Anyway, my point was that it doesn’t bother me in the slightest when people get the twigs’ genders wrong. However, the other day it did bother H. He got into quite a heated discussion with another little boy who said he couldn’t sit on the seesaw with him because he was a girl. (He was only about the same age as the twigs so it was interesting that he already had the idea he didn’t want to play with girls, but hey that’s another issue!) Anyway, the kid took some convincing by H, who got quite cross that he wouldn’t initially believe he was a boy. Eventually he did and said H could go on.

But it made me think. Even if it doesn’t bother me when people get their genders wrong, is it fair for H to be getting upset by it when it’s something that could quite easily be solved with a simple haircut? (That’s assuming that it is the hair that causes people to think he’s a girl… He does often wear leggings too! I think it’s more likely to be the hair though).

Obviously the issue is with society really. The fact that even at such young ages, children have such strong views about what’s right and wrong for each gender, is just crazy. They’re not born with these ideas – it’s either taught to them or they pick up on them from their environment. As a parent, I absolutely concede that it is hard to control. Within just a few months of being at nursery, I remember C picking up a remote control car and saying ‘that’s a boy’s toy.’ Obviously I corrected her and told her that everyone can play with whatever they want. I don’t know if that came from the staff or other children or what. But it’s just everywhere. Advertising, for example. The twigs like watching Milkshake on Channel 5 in the mornings, but my god the gender stereotyping in the adverts is insaaane! Pink sparkly unicorn everything for girls and blue racing cars and trucks for boys… Like there’s no option for anything else.

But even if it’s society that needs to change, is it fair for me to put that on to my little boy? He’s not particularly bothered what length his hair is so is it right for me to keep his hair long just because I think it suits him more? Knowing he will most likely continue to be repeatedly mistaken for a girl and get more and more frustrated by this? Also, we all know children can be pretty mean sometimes. I’m already worrying about whether he’ll settle in ok at school and make friends etc. Should we be trying to help him fit in and not making him look different or stand out?

Morally I absolutely disagree with this. We should all be doing our bloody best to teach our kids to be kind and accept everyone whatever their differences. It shouldn’t matter what anyone looks like. But in reality it just doesn’t always work like that. There are going to be kids who are exposed to less accepting views at home and are we just setting H up to be picked on for something that isn’t really his choice?!

I know I’m probably really overthinking this. The fact is, society has moved on a lot. I know from teaching in classrooms myself that there are plenty of boys with longer hair these days and it’s not remotely an issue. And even if it was, you hope you can instil in your own child the confidence not to care what others think and to just be themselves.

I don’t think I can bear to have his hair cut short. He really does suit having it that bit longer. It needs a trim anyway, as it’s not been growing particularly evenly and looks like a bit of a bird’s nest a lot of the time! Also, some moron (aka me) hacked away at his fringe the other week as it was getting in his eyes, and now it’s pretty wonky. So, the appointment is booked for tomorrow. I think we’ll just go for a trim for now and see how we go.

If you’ve got this far, thank you for indulging me in a bit of pre-starting-school, overthinking-crazy-mother ridiculousness! What are your thoughts? Boys with long hair – yay or nay?