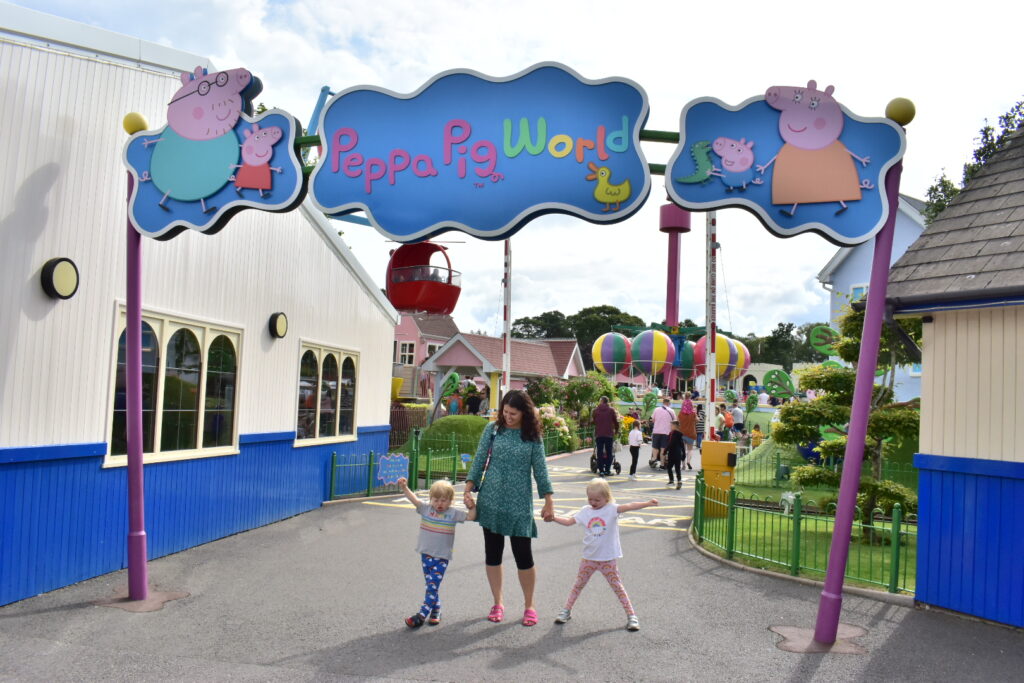 Welcome to the latest post in my Twiglet Top Tips series. Today I’m reviewing Peppa Pig World in Paulton’s Park where we enjoyed a day out last week. I’m going to talk about our experience and hopefully include a few helpful tips if you’re planning a visit there yourself.

So let’s get one thing out of the way – the queues! Now obviously we visited during the middle of the summer holidays so there were always gonna be queues! Pretty unavoidable really! We arrived at just before 10am when the park opened and the queues to get in were absolutely fine. It was quickly getting busier and busier though so my first tip if you’re visiting Peppa Pig World is to get there as early as you can.

We headed straight for Peppa Pig World as soon as we got into the park. We found there was easily enough in there to keep our two occupied all day. So we didn’t actually see or go on any rides in the rest of the park! I think maybe during holiday times you might need two days if you wanted to fit a bit more in. As we were walking around, I noticed how well-maintained and pretty it all was – beautiful gardens, lovely flower displays etc. If we’d have had time, the Lost Kingdom looked fab.

Anyway, when we got to Peppa Pig World I was immediately struck by how cute and just perfect for kids it looks. All the rides are super colourful and interesting. The weather was looking pretty iffy though! Anyway we joined a queue to meet Peppa and George, which moved really fast. They had a photographer taking pictures so you had the option to buy one, but you could take your own anyway so we just did that. Meeting the characters was definitely a highlight of the day for the twigs! 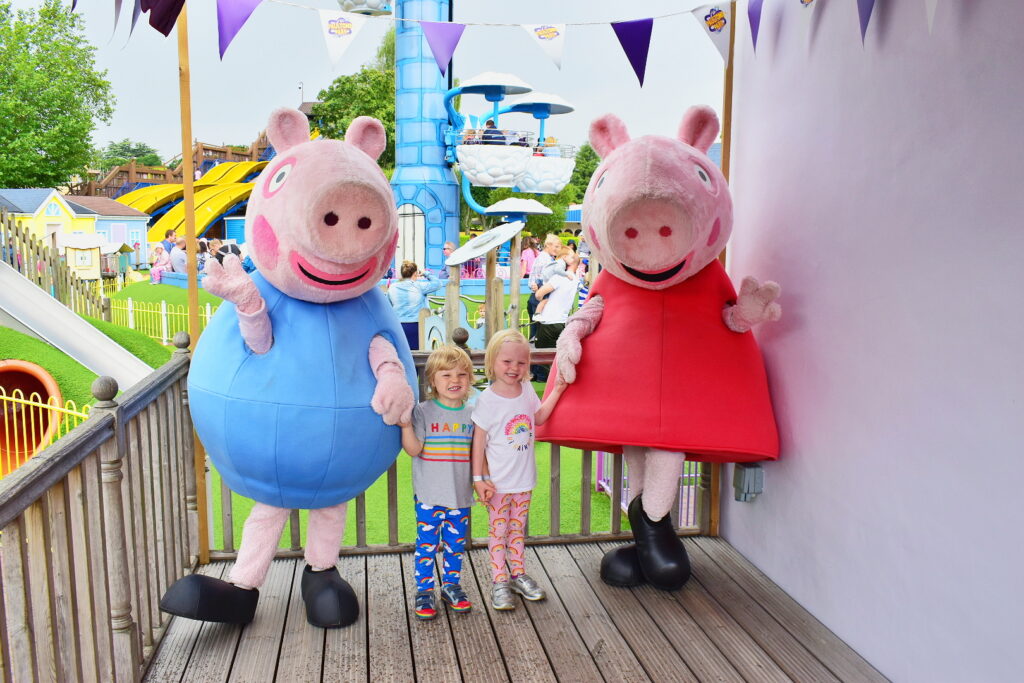 Just after this, the heavens opened and it started absolutely pouring. So we made a beeline for the softplay (George’s Spaceship Playzone). Of course, so did a LOT of people and it was soon absolutely heaving. It was fine though – it didn’t feel stressful. The other half queued at the cafe to grab some coffees while I kept an eye on the twiglets playing. There was loads in there to keep them occupied – slides, rope ladders, ball-blowing machines (don’t know if  there’s a proper name for those!) etc. Once the rain calmed down, we joined a queue to go on Miss Rabbit’s Helicopter Flight. It was probably around 11/12 by this point and this was the longest queue we were in throughout the day. It took about 45 minutes. Of course it seemed like every other child was waiting beautifully and patiently, apart from ours who were whinging like their lives depended on it!

My main advice here, if you have impatient little toerags too, would be SNACKS! And of course distraction, distraction, distraction. We played Eye Spy, alphabet games – anything we could think of really! We also chatted to the family in front of us (mainly because I was incredulous as to how their 2-year-old was waiting so nicely and our 4-year-olds were being utterly feral!) It was another good distraction though and actually the wait didn’t feel too long. The ride itself was really fun and the twiglets loved  looking out at everything from up high. 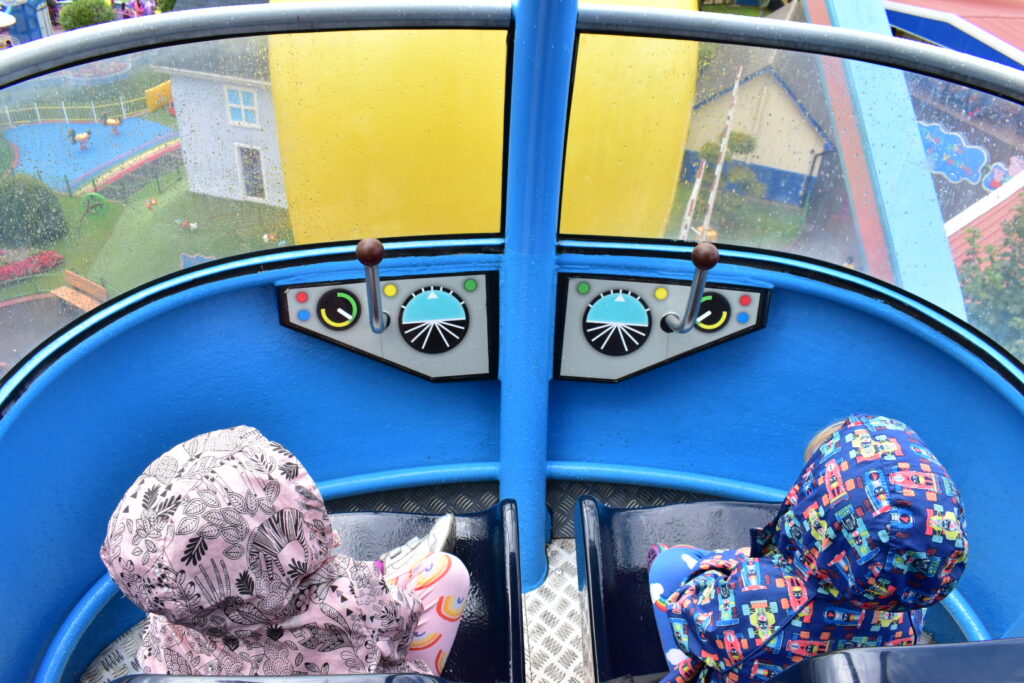 After this, we went to get some lunch. Being veggie, I was really impressed at how many vegan and vegetarian options there were. I tried a spicy bean sausage roll and it was really yummy. The twiglets enjoyed their pizza and chips too.

After lunch, we went on Grandpa Pig’s Little Train ride, as the queue wasn’t too big and was moving quickly. This was really sweet and the twiglets enjoyed it.

Then H and C started to get a bit grumpy (standard!) so we headed for Mr Potato’s Playground for something a little different. This is a great bet if your little ones are getting tired/bored of queuing or just a bit overwhelmed by all the rides. They had lots of fun playing here.

Then, as the weather had improved drastically from the morning and it was actually feeling pretty hot, we tried out the splash pad. This was absolutely brilliant. We had very nearly not brought the twigs’ swimming stuff as the weather had been so shocking. But I’m so glad we did, as they LOVED it.

After they’d finished splashing about and been dried off, we went on a few more rides. As it was starting to get a bit later in the afternoon, the queues were so much shorter. I would definitely recommend staying that bit later if you are able to. We got on so many more rides in the last couple of hours between 3 and 5pm.

All in all, we had such a fab day! The twiglets thoroughly enjoyed themselves and are still talking about it now 🙂 I would really recommend Peppa Pig World if you have young kiddies.

You can book tickets for Peppa Pig World here. Your tickets will include access to all the attractions in Paultons Park. If you can go during term time, obviously it will be less busy. But if you can’t, try to arrive early and stay later if you can. Or you can get two-day tickets which may well be worth it, especially if you’re travelling from a distance and staying over.

Children under 1m are free so definitely take this into consideration too, as it makes a big difference to the cost. Time-saving tip: If your child (like H) is only just over a metre, you can queue when you first go in to get your child measured. They’ll then be given a wristband which shows all the ride attendants that the child has been measured and is over 1m, meaning they don’t then need to be remeasured on every ride. (If you’re just  in Peppa Pig World, I think there’s only one ride that you need to know the child’s height for anyway but would be good for the rest of the park).

Thanks for reading – hope it’s useful!

NOTE: Our tickets were kindly gifted by Paultons Park but as always, all opinions are honest and my own 🙂 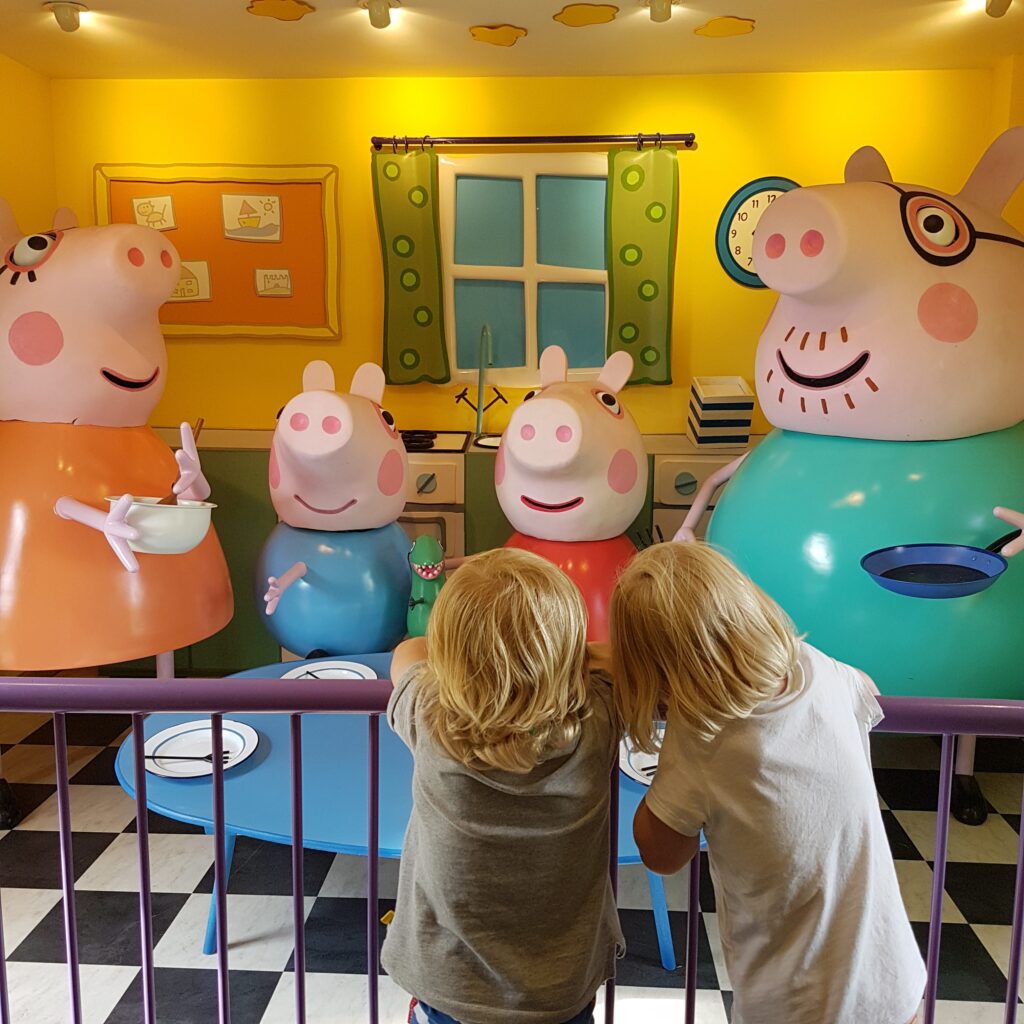 Why I’m Not Planning Out The Summer Holidays