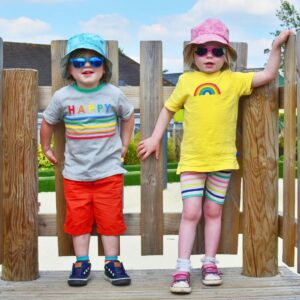 It’s all beginning to feel very real. We received letters in the post the other day confirming which Reception classes the twiglets are going to be in from September. Separate classes. Our little twins are going to be separated from each other for the first time in their lives.

I wrote a post recently on how I was feeling about the twiglets starting school (read it here). I apologise as I’m probably going to repeat myself quite a lot in this post, but I really wanted to focus a bit more on the issue of putting twins in separate classes. It’s something I’ve been feeling particularly emotional about recently so I wanted to share in case others feel the same.

Obviously we knew the twins were going to be in separate classes – it was our choice. Instinctively I knew for a long time that it would be the right thing to separate them. C is quite dominant – I could say bossy but let’s stick with dominant. She tends to mother H a lot, which is very sweet but probably not entirely helpful for his development. So for H’s sake, I think it is the right decision. Hopefully it will give him the space to learn to think for himself, organise his own things and develop his confidence to speak out and voice his opinions. And for both of them, we hope it will encourage them to make their own friends and improve their social skills, rather than staying safe and sticking together as they have a tendency to do. Also, they can get sooo silly when they’re together, which obviously would not be ideal in a classroom setting!

When I looked round primary schools in our area, one of the most important criteria for me was their policy on separating twins. Even though I’d known for ages that I wanted ours to be separate, it was still really important to me that the school considered parents’ views on this. It’s such a big issue for parents of twins or multiples. I know that some schools routinely separate twins, and parents have to fight if they want to keep them together. Luckily our school leaves it totally up to the parents. I received a phone call from the school, not long after receiving confirmation of the twigs’ places, asking us what we wanted.

God I hope the twiglets are going to cope ok. In my heart of hearts, I feel quite sure that they will be absolutely fine in the long run. It’s going to be a big adjustment to begin with though. Starting school is a huge change for any child anyway – this is just an added element. The twin bond is such a special thing. As with most twins, the twigs have been together for nearly every minute of their lives so far and their relationship is so lovely. Obviously they fight and beat the living crap out of each other frequently, as do any siblings I’m sure, but the way they look out for each other and show affection to each other is just so special. Writing this is making me quite emotional!

Anyway when I mentioned to the twigs, quite casually, that they would be in separate classes at school, I didn’t really expect them to think much of it. But C instantly burst into floods of tears and clung to H saying she wanted to stay with him. This of course absolutely broke my mummy heart in two. I explained that they would still see each other lots and they’d still be able to play together and they seemed to accept it.

Now that it’s all seeming pretty real, I can’t help but feel a little bit sad. Even though I still do believe it’s the right thing for them to be separated, it’s impossible not to feel emotional when I think of them in different classrooms doing different things. Of course, just to make it harder, they have been extra sweet with each other recently. When we were on holiday, we could see their confidence and independence growing as they joined in with the evening activities. However, this was mostly only when they were together. H didn’t want to go up to the front without C and they would hold hands with each other whenever they felt a bit nervous. Very very cute but jeez, timing guys! Don’t start showing an interest in each other now you’re about to be separated!!

Anyway, I’m optimistic that it will all work out for the best. Ultimately, only a parent can answer the question of whether twins should be in the same or separate classes at school. Every set of twins is different and what’s right for some will not be right for others. TAMBA have some great resources on this issue and can offer support if you need it. I hope and pray that we have made the right decision for our twiglets – only time will tell I guess. I’d love to hear from you if you have experience in this. Did you separate your twins or keep them together?

Why I’m Quite Enjoying Social Distancing