10 Things I Didn’t Know About Having Twins 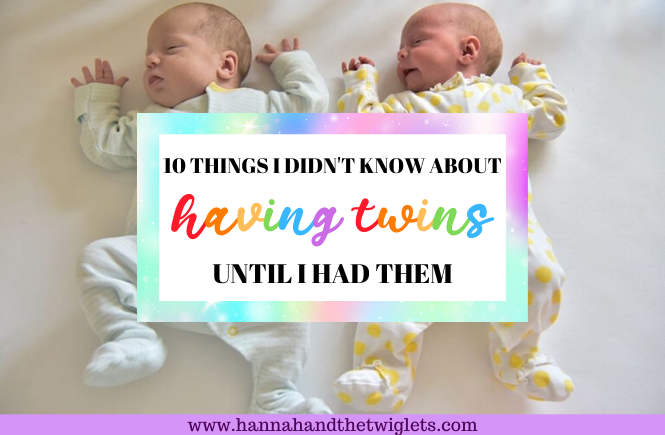 Having twins has been a huge learning curve. I feel like I’ve learned so much in a very short space of time since the twiglets were born! So I just thought I’d share some of the things I didn’t know about having twins, until we had them. Obviously this is just my perspective but I’d be interested to know if others can relate 😁

1. You get more attention than you could ever have thought possible.

Being out and about with twins is at best conspicuous and at worst a bit of a freak show. I had never realised just how much attention parents of twins get. Complete strangers will want to peer into the pushchair at your babies, get closer than you’re really comfortable with to your babies and even kiss your babies!

While I’m not too keen on people overstepping the mark like that, personally I have never minded being stopped for a quick chat. Yes, it can be a bit inconvenient, like when you’re running late. (Which is always for me – see number 7 😂🙈) Or in the earlier days when you had a narrow window of time to run errands between feeds.

But I love that people are so amazed and fascinated by twins and I love to talk to people about them. You do get the same questions over and over and over though, and I WISH I had the balls to give some cheeky responses sometimes.

Responses I wish I had the balls to give to silly twin questions:

‘Are they twins?’
Well durrrr….
Yeah it was buy one get one free.
No they’re triplets but I left the ugly one at home.
OR
‘Are they identical?’
Um one has a penis and one doesn’t.*
*Yes I know there are very very very rare circumstances in which boy/girl twins can be identical but people don’t generally know that when they’re asking 😂
‘Were they natural?’
Errrrr… Well they’re not aliens…. Wait are you really asking me, a total stranger, how my babies were conceived?!!

(It always baffles me that people think this is an appropriate thing to ask! Especially as tons of singleton babies are conceived through IVF as well as twins. But no-one would ever dream of asking a mum of one baby whether they got pregnant by hormone injections and test tubes or by bonking 😂)

You will have the phrase ‘double trouble’ said to you with a ‘knowing’ smile at least five times every time you leave the house with small twins. What amuses me is that everyone who says it looks really proud of themselves. Like they think they’ve thought of something super clever and original to say to you that you won’t ever have heard before 😂 Again, I don’t mind it though.

I know for some twin parents, this phrase is like a red rag to a bull and they take offence and respond with things like ‘no, double the joy actually.’ I tend to just smile politely and not give away my amusement that they’re the fifteenth person to have said that to me that day. Also, my two really are double trouble anyway 😂

3. Everyone knows some twins.

Nearly everyone who stops you will want to tell you about how their neighbour’s second cousin’s uncle’s brother’s dog had twins. As if somehow that’s interesting to you just because you also have twins 🤣

I must admit though, I love it when elderly people come up and tell me about their twins who are like 40 or 50 😍 Gives me hope that I’ll survive if nothing else 😂

4. Having twins means there will be some things that you just can’t do with your singleton mum friends.

Or if you can, they’re just not worth the added stress of trying to do with double the children.

I’m talking about swimming for example. A lot of swimming pools have set ratios of adults to children which wouldn’t allow you to take young twins swimming. Personally, whether the pool allowed it or not, I wouldn’t attempt it in a million years.

You may know by now that H is a runner. It’s generally his sole mission in life to escape from wherever he’s meant to be. And damn that kid is fast. Add to that, he’s extremely stroppy and unpredictable and his sister can also throw a bloody good tantrum. So you can see why I wouldn’t feel confident attempting the logistical nightmare of changing, getting to the pool, managing them in the pool and changing back again, by myself. I know some twin parents manage it and hats off to them! 😁 But I know my limits (well, sometimes 🙊) and that is definitely a no-no for me.

The dreaded softplay is another. Well, not a total no-no. But there’s no doubt that it’s decidedly trickier to keep an eye on two mini-demons tearing around an indoor hellhole than one.

Especially when said mini-demons ALWAYS go in opposite bloody directions.

Again, if you were lucky enough to have children who actually listened to you and/or stayed together, it might be more manageable. But H’s Houdini capabilities make me too nervous to take my eyes off him as I know he’ll somehow find his way out of the building 🙈

So I tend to stick to the small local (sometimes slightly crappy 😂) softplays. You know the ones in a church hall with a bouncy castle and a few toys, maybe a little ball pool if you’re lucky! At least then they’re both in one room and I might actually have half a chance of being able to knock back a hot coffee while they play (I can but dream 😂)

5. Leaving the house will become an actual military operation.

I could never have envisaged just how difficult it would be to get out of the house after having twins.

When they become toddlers, you also have the added joy of having to chase them round the whole house and wrestle them in order to change their nappies and get them dressed. Not to mention a few thousand battles over why they can’t have a snack right that second, why they can’t bring their most special comforter out, why they can’t wear their jelly shoes when it’s -2 degrees outside…

And just when you think you’re fiiinally ready to leave the house, suddenly it’s all systems 💩 and you’ll have to bring them both back in to change their nappies 😬 Even better, one or both of them will have had a full-on poonami so you’ll have to remove the coat and shoes you battled to get on and change their whole outfit as well!

6. You will never be on time again.

7. You will get through more nappies and wipes than you could ever have imagined.

I mean really, it’s just INSANE. And if they get a tummy bug, you may as well just take out shares in Pampers. (Or Tesco, or Asda, or a cloth brand – whatever you use 😁 We’ve always used Aldi nappies as they’re super cheap and we’ve found them to be really good 😁

Everything’s so crazy and busy, time just flies by. It’s the weirdest thing though. Half of me feels like they were just born a few days ago and doesn’t know how the frick it’s been two and a half years… But the other half feels like it was another lifetime when they were babies and can barely even remember what it was like.

It makes you feel like you really must savour and appreciate every moment because it’s all so fleeting and will have passed by before we know it.

While this is true, it’s also true is that not every moment is a savourable one. Some of them are downright crap and I still think it’s important not to feel guilty and to talk about those times if you feel you want to or it helps you. Completely went off track there but hey ho! 🤣

9. Two hands are not always enough.

To have two babies demanding from you and needing you All. The. Time. can feel quite relentless. If they both get poorly, or when they both had reflux/wind issues when feeding in the earlier days, or when they’re both teething and grumpy, two hands really aren’t enough.

It’s not easy picking up two babies (although it’s amazing how proficient you do get at it. I used to just scoop C up with one hand when they were smaller). Then jiggling/rocking them both for hours. Especially when you have bottles to sterilise, or washing to do, or cleaning or, heaven forbid, needing to eat something yourself 🙊

Also it’s just so stressful when two babies are unhappy and screaming, especially if you don’t really know what’s wrong or what to do. Babies’ cries are designed to elicit an emotional response from you, so when you double that, it can be really quite distressing. I used to feel such anxiety at going out in public, in case both of them decided to have a meltdown and I looked like I couldn’t cope.

Nowadays I am much more relaxed about this. The twiglets are a lot more predictable now and you can reason with them a bit. And if all else fails, there’s always snack bribes 🙈 Plus, I think I just don’t care as much about what other people think.

10. Seeing the really sweet moments between your twins will totally make up for the hard times.

I mean when he runs over to check she’s ok and helps her up when she’s fallen, without having been asked. Or when she chooses to share a toy with him of her own accord, not even realising you’re watching. Or when she rests her head on his shoulder as they sit watching tv together.

When they make each other properly belly laugh and you have no idea what the hell they’re even saying, but to them it’s hilarious. Or when they give each other a hug for no reason. Or when they chase each other round the living room, giggling and squealing.

I could go on. These moments may be interspersed with extreme naughtiness, a ton of tantrums and just the daily grind of changing twice as many pooey nappies, sterilising twice as many bottles etc etc. But they are so amazing that they just make you sit back and think:

‘Holy crap, we made two babies at once and they’re actually pretty bloody awesome!’

So, those are some of the things I didn’t know about having twins. What would be on your list? Anything I’ve missed? I’ve tried to include things that are specific to twins. I’d love to know your thoughts 😁 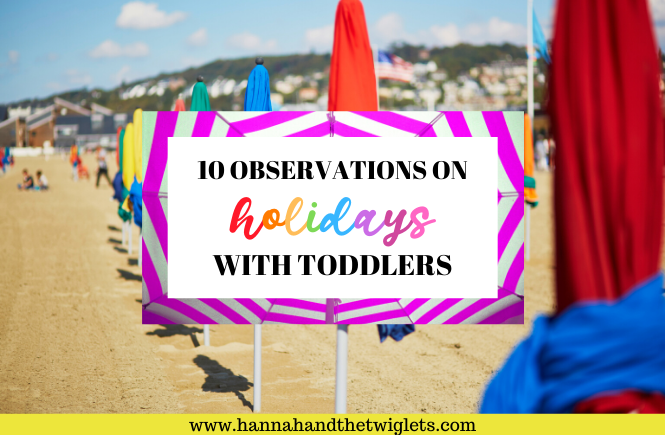 10 Observations On Holidays With Toddlers 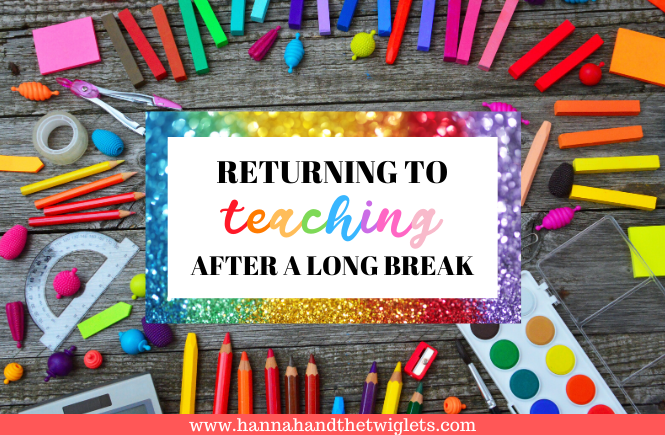 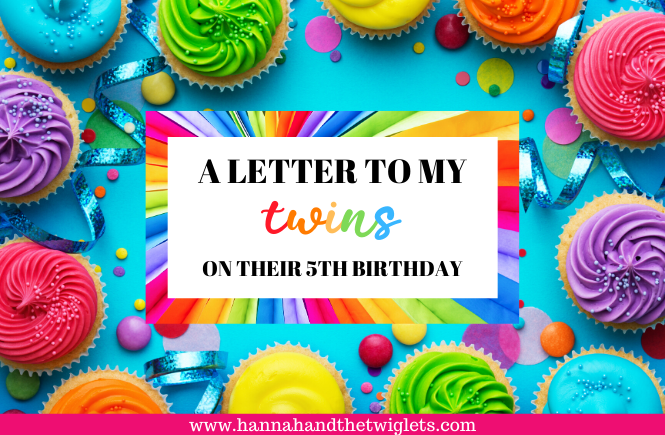 A Letter To My Twins On Their Fifth Birthday